View the trails and lifts at Jackson Hole with our interactive trail map of the ski resort. Plan out your day before heading to Jackson Hole or navigate the mountain while you're at the resort with the latest Jackson Hole trail maps. Click on the image below to see Jackson Hole Trail Map in a high quality. 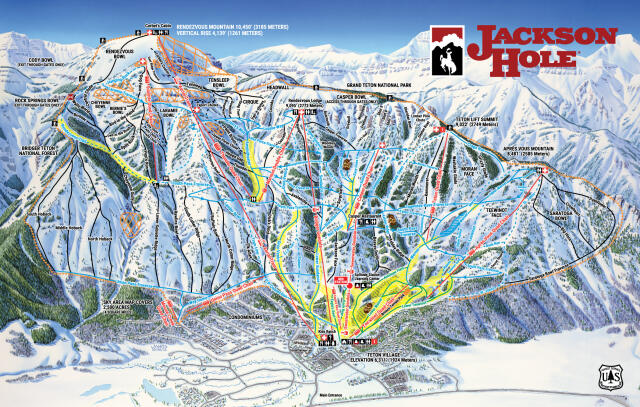 Jackson Hole Mountain Resort (JHMR) tram stretches 4,139-feet from the base area to the 10,450-foot summit of Rendezvous Mountain. The Aerial Tram can hold 100 passengers and takes about 9 minutes to reach the top. There are plenty of signs that warn you to be careful when taking on these slopes. Even the most skilled skiers can find themselves in trouble around JHMR’s 2,500 acres. The named runs are well marked though, so most often you have to go looking for trouble.

Featuring two mountains, Apres Vous and Rendezvous, Jackson Hole Mountain Resort is known for steep skiing and gorgeous scenery, and is home to 2,500 acres of skiable terrain, 3,000 backcountry acres, 133 names trails on the ski map and 4,139 feet of vertical drop. The ski resort receives an average of 459 inches of snowfall each year and boasts a summit elevation of 10,450 feet. The Wyoming ski area may be notorious for extreme terrain like Corbet’s Couloir, but Jackson Hole also caters to intermediate and beginner skiers with groomed terrain, which is accessed off the Teton Lift. Jackson Hole skiing difficulty ranges from beginner to advanced. In fact, 10% are green, 40% blue and 50% black runs.

People joke that a “powder day” at JHMR is more a “powder hour.” Locals here are hard-charging and can track out the area fast. In 1999, when JHMR opened the gates to lift-accessed backcountry, it was one of only a very few resorts to allow skiers and snowboarders to exit inbounds terrain. The Headwall and Casper Bowl are inbounds, but still require a 20-minute hike from the top of the Bridger Gondola. If hiking isn't your thing, Saratoga Bowl and Moran Woods, off Apres Vous and Casper, respectively, aren’t as steep or as long as the Hobacks (off the Sublette Quad), but, because of that, do usually offer fresh tracks for longer. The trees to either side of Pepi’s Ridge (Sublette Quad) can hold powder for a while, too. If you have the necessary backcountry gear - transceiver, shovel, probe - and skills, go ahead and aim for some true backcountry. Rock Springs and Cody Bowl, both just south of the resort boundaries and accessed through marked gates, are good starters, albeit fairly easy to get to, so fresh powder doesn’t last long there. Backcountry runs in Granite Canyon, to the north of the resort in Grand Teton National Park and accessed from the top of the tram or the Apres Vous lift, are more committing. They require route finding skills or, better yet, someone who knows the area and is willing to let you follow them. Know that even though you don’t need climbing skins to get out of Granite Canyon, they’re never a bad thing to have in your backcountry pack in case you do get lost. The way back to the resort from Granite Canyon is a traverse, but not completely downhill. Expect to expend some serious energy before popping out near the bottom of the Apres Vous lift.

Consider this fair warning: The ski area's only beginner terrain is off the Eagle’s Rest double chair and the high-speed quad Teewinot lift next to the gondola in the base area. Together, the two lifts make for a nice learner’s area. Once you’re an intermediate skier, you have quite a few choices at JHMR. If you don’t want to worry about having to pay particular attention to a ski trail map (and perhaps ending up above a cliff), Apres Vous Mountain is your best bet. The smaller and less cliffy of the resort’s two mountains is serviced by a high-speed quad from the top of the Teewinot lift and, heading skier’s right from the top of the lift, has an array of groomed intermediate runs stretching its entire face. The easiest intermediate runs on the mountain, which are still a big jump in difficulty for those coming from skiing the resort’s green runs, are off the Casper Bowl Triple Chair. Easy Does It, Lift Line and Camp Ground are the most mellow runs off this lift. Horn’s Hole Traverse to Amphitheater from the top of the high-speed quad Thunder Chair is another of the resort’s more mellow intermediate runs. The Bridger Gondola accesses a lot of intermediate groomers, but they are substantially steeper than the runs mentioned off Casper and Thunder. Gondola intermediates are generally moderately steeper than the intermediate runs off the Apres Vous lift.