Does elevation affect temperature? The answer is yes. But meteorology, like other sciences, isn’t quite that simple. It is important to remember that temperature can vary for a variety of reasons including shade, sun, nearby buildings (or lack of them), and inversions (colder air sinking into valleys because it’s heavier than warm air). All of those things and more can influence the temperature. So, can you estimate the temperature at the summit if you know the temperature at the base?

Wondering why temperature decreases with higher altitude. Michael Tinnesand, associate director for academic programs at the American Chemical Society, explained in Scientific American like this: “The farther away you get from the earth, the thinner the atmosphere gets. The total heat content of a system is directly related to the amount of matter present, so it is cooler at higher elevations.

Here’s a handy chart to visualize the temperature decrease with elevation:

Want to get a bit deeper into the weeds? The temperature in the troposphere — the lowest layer of the earth’s atmosphere — generally decreases with altitude. That’s because the troposphere’s gases absorb very little of the incoming solar radiation. Instead, the ground absorbs this radiation and then heats the tropospheric air by conduction and convection, according to COTF (Classroom of the Future Meteorology of Ozones).

Or perhaps you’re at the top of the mountain on a sunny but very cold day with temperatures around 5°F. It’s early afternoon and while it was cold when you started the day at the base, you’re now thinking it would be fun to head to the bottom to have a beverage and sit in the sun. But will it be warm enough down there? Of course!

So, bundle up the higher you go on the mountain and enjoy a great day on skis or snowboards, regardless of the weather. 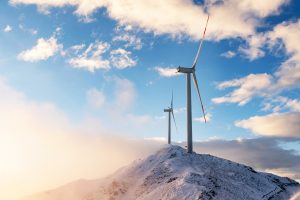 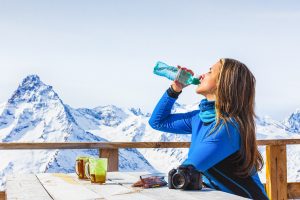 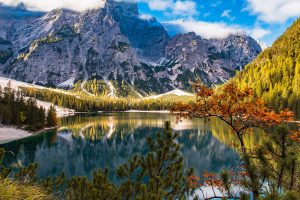