Leaf peeper is a friendly name for those of us who get excited as the colors begin to change in the mountains, marking that ski season isn’t far away. Foliage colors reach the mountains near our favorite ski resorts at different times, at different stages and with a multitude of colors. The gold standard for fall foliage is New England, with ground zero being the Green Mountains of Vermont that turn brown, red, yellow, and orange in the fall for a few glorious weeks.

While it may seem odd that we get such joy from the annual death of leaves from deciduous trees, there’s a fascinating science behind it. Scientists at the University of Virginia explain the short version like this: The colors are due to plant pigments in leaves. Chlorophyll is the pigment responsible for the green color in leaves, and for producing carbohydrates plants need for growth. It does this through the process of photosynthesis, producing sugars and oxygen from carbon dioxide and water. Carotenoids are the pigments responsible for yellow and orange colors in leaves, while anthocyanins are the pigments responsible for red and purple fall leaf colors. These colors are only produced in the fall when sugars are trapped in the leaves.

Late September and early October is often the sweet spot in New England, when the rolling hills and ski areas are dotted with a brilliant array of colors. Out west, those blazing yellow aspen groves are brilliant, which you’ll find at many of your favorite Rocky Mountain ski resorts. Colors typically peak in Colorado’s northern mountains throughout September. The central mountains typically peak the last week of September. Later in the fall, in October, is when the fall foliage often starts peaking in Wyoming.

Here’s our guide to fall foliage west and east:

Fall colors start making their appearance in Jackson Hole in early September. It’s usually in early- to mid-October when the colors reach their peak in Jackson Hole. As such, those aspen trees are yellow and bold just before the snow starts flying at Jackson Hole Resort.

It’s only fitting that Aspen would be on a list of the tap fall foliage destinations, since it’s named after the aspen trees that dot the region. Don’t wait until October, however, to see Aspen’s aspens. Peak foliage in Aspen has a short window, but is typically in September toward the end of the month.

Generally speaking, mid- to late-September is your best bet in Colorado for leaf peeping, and Crested Butte is no exception. Last year, however, saw a long and late fall foliage season that extended into October. Drive Kebler Pass, just west of Crested Butte, for one of the beautiful fall foliage drives in Colorado. 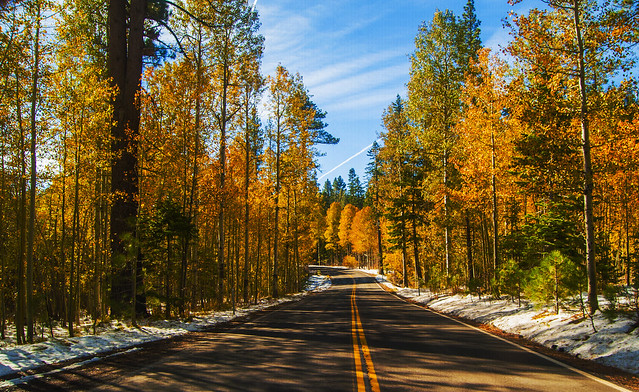 Further west, on the California/Nevada border, the fall colors hit a little bit later in fall, typically in October. Roads like the one in the above photo, near Palisades Tahoe, are beautiful year-round, but especially during the month of October just before it starts snowing. Mammoth Lakes in the fall is a colorful prelude to winter. The fall foliage starts turning by mid-September, and depending on the year, the color can remain as long as late October.

Fall is a short, but beautifully sweet season in Park City, Utah. Mid- to late-September is a safe bet for seeing the best of Park City’s fall foliage, with the leaf peeping season often wrapping by early October. Don’t go without driving the beautiful Guardsman Pass Scenic Byway.

While Vermont may be the first thing to come to mind when you think New England fall foliage, don’t sleep on Massachusetts. Wachusett Mountain, near Worcester, Massachusetts, offers up a full-color display in fall. You can expect the best fall colors around Wachusett Mountain in late September and early October.

As the photo above shows, there’s a reason why Vermont is so renowned for its fall colors. Despite the name, the Green Mountains of Vermont bring a kaleidoscope of colors come fall. In the Killington area, you can expect the colors to start changing in mid-September, and linger as long as late October.

West Virginia is a sleeper for fall foliage. Around Snowshoe, the fall foliage often kicks in later than many other destinations, typically in late-September, and continues through much of October. What state has the most ski resorts?