Do you want to ski or ride across the pond for the vacation of a lifetime? Let us help simplify the search by telling you all about “The Big Four.” But, first, why head to the Alps when you have all those great choices here at home.

You’ll likely find the perfect place among 1,100 ski resorts in the Alps. So many alpine resorts are close “neighbors” they form huge, interconnected ski fields (trails, lifts, and shuttles) so your variety can be endless and you’ll never ski the whole resort on this holiday. If it’s a low-snow season (it happens, the Alps are indeed lower in altitude than the Rockies) you can rely on fun skiing on high altitude glaciers and at snow-sure resorts. And, by the way, apres-ski was invented here.

Skiing in France usually means two things: skiing at a very high altitude and in huge resorts. France is famous for its cosmopolitan ski resorts. Most of them, like La Plagne for instance, were built from scratch in the 1950s and 1960s, in places where there used to be nothing but the Alps. As a result, many of the resorts are located higher than in any other European country (like Val Thorens at 2300 meters (7,500 feet) above sea level, or Tignes at 2100 meters — 6900 feet), which means that excellent snow conditions are guaranteed up to half a year. 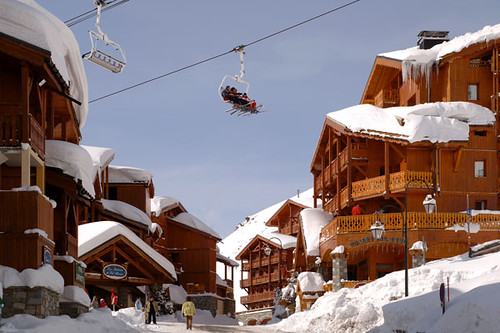 Among the many enormous French ski areas, the Three Valleys and Portes du Soleil are the biggest. The Portes du Soleil spans 650 kilometers of slopes that are dispersed into 12 individual resorts in France and Switzerland. The Three Valleys is the world’s biggest interconnected ski resort, covering 600 kilometers of slopes. If you want to go off-piste, Tignes, Les Deux Alpes, and Val d’Isère are a good choice.

Most of the stations, among which Chamonix is by far the biggest and most cosmopolitan, offer restaurants, pubs, concerts, discotheques, spas, gyms, and the option to shop till you drop. There are some exceptions though. Les Gets in Haute-Savoie are two examples of smaller resorts that have retained their traditional charm, with alpine architecture, family-run guesthouses, and typical cuisine of the region manufactured by farmers living nearby.

The French Tourist Board awards family-friendly resorts with the “Famille Plus” label. If you are looking for moderate prices for families, daycare, and entertainment programs for children, then you are well-advised to look for a “Famille Plus” resort, such as Châtel, Les Gets, Les Deux Alpes, or Val Thorens.

Ski lift prices throughout the four nations are similar. Be sure to check the resort websites for up-to-date- pricing. The airports of Geneva, Lyon, Nice, and Milan provide international links to the French Alps. Buses and shuttle services run from these airports.

The French Tourist Board says, “Whether you’re heading to centuries-old towns or a resort that combines the two, skiing is big beyond imagination and the French ‘joie de vivre’ is for real.”

Austria’s most popular and famous skiing region is Tyrol, with 3500 kilometers of slopes and its world-famous resorts such as Soelden, Ischgl, and St. Anton. The region of Salzburg comes in second, with 1700 kilometers.  Saalbach-Hinterglemm and Obertauern are Salzburg’s most popular ski resorts. The third place is shared by Vorarlberg (with Lech-Zuers am Arlberg as its most popular resort) and Carinthia with 1031 kilometers of ski slopes. 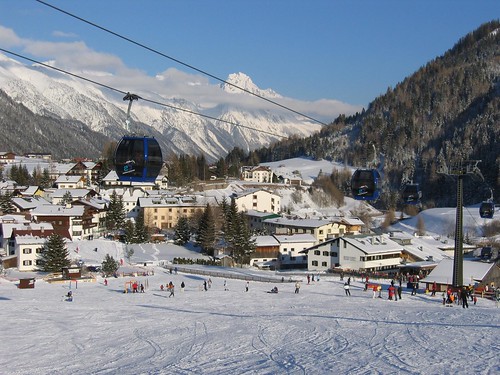 The concept of “après ski” has it origins in Austria

Après-ski is said to have its origins in Austria. Sometimes the parties can begin at lunchtime. You can have beer, champagne or Jagertee (tea with rum) in cozy huts close or on the slopes or in bars and discotheques in the villages. St. Anton, Ischgl, Soelden, and Saalbach-Hinterglemm are famous for their après-ski parties.

On the other hand, Austria is also home to alpine “Gemuetlichkeit” (geniality; friendliness) and delicious local cuisine. Most of the inns and huts are run by local families who are happy to serve you traditional dishes, such as dumplings, pasta with cheese, schnitzel, and tons of sweet pastry. Some fruit schnapps (Obstler) afterward is a must to try. Visit when the World Cup racing season is in town for a real extra treat (think Kitzbuehel and the Hahnenkamm Downhill in January).

Fly into Munich or, even better, Innsbruck, an ideal base for Tyrol: You can reach all resorts within 15 minutes to two hours from there. The historic city is a blend of history, culture and sport. No need to rent a car as free ski buses take take you to the slopes and back.

Switzerland is proud of its traditions, its old heritage, and its unique nature. Uniting four different peoples and languages in one country, Switzerland is also the most diverse among the alpine winter sports destinations. Most of the Swiss ski resorts are located in the regions of Valais, Graubuenden, Central Switzerland, Bernese Oberland, and Eastern Switzerland. 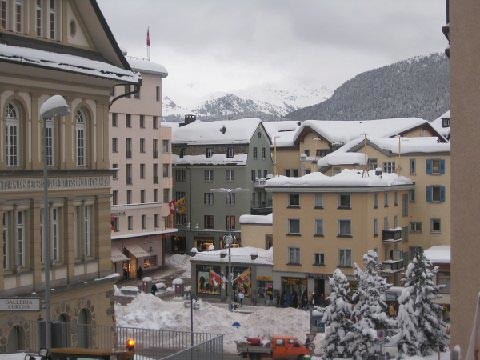 Valais offers the highest peaks (47 of them higher than 4000 meters, more than 13,000 feet) and the longest slopes (up to 17 kilometers at Zermatt). You can find the coziest huts and the largest network of hiking and snowshoeing trails in the Bernese Oberland. The Lake Geneva area is famous for its nature reserves, but also for Europe’s biggest ski resort, the Portes du Soleil, including twelve resorts in Switzerland and France. In the Jungfrau Region, you can find powder slopes up to 3000 meters. The Canton of Lucerne is perfect for freeriding. The Fribourg Region offers less spectacular pistes than the others but is perfect for a budget vacation.

Among the 30 most popular ski resorts, St. Moritz is not only the most glamorous, the sunniest, and the biggest individual resort in Switzerland, but it is also pricey. There are some smaller and less cosmopolitan ski resorts such as Andermatt or Bruson, though, where a family of four can go skiing for a whole day and have a hearty Swiss lunch in a cozy hut for much less than the more famous resorts. The most family-friendly resorts bear the “Familien willkommen” (families welcome) label.

Don’t forget to try the cheese: a ski holiday would not be the same without having had cheese fondue at least once. OK, twice.

The most convenient Swiss airports for skiers are Zurich, Bern, Geneva, and Basel. The railway system in Switzerland is one of the world’s best and most interconnected. International trains from twelve countries go there on a daily basis. On time.

Most European skiers think skiing in Italy means skiing in South Tyrol. That’s because it once belonged to Austria and is today known for comfortable ski resorts and cozy villages. Slopes are well groomed; many of them are wide and moderately steep, perfect for relaxed carving. South Tyrol also offers a hearty cuisine (the ham and the Vinschgau bread are renown) and some exquisite wines. Farm holidays close to the ski resorts are a wonderful and low-priced alternative to hotels. 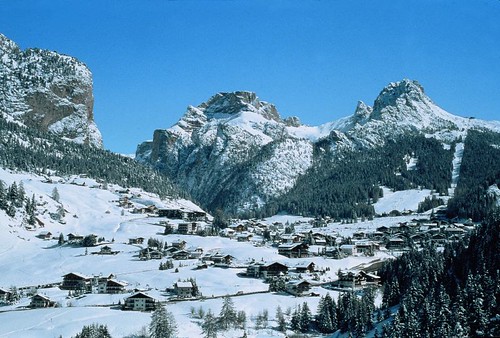 The Dolomites (located mainly in the South Tyrol, Trentino, and Veneto regions) are regarded as the world’s most beautiful mountain range by many. They are part of the Unesco World Heritage. The Dolomiti Superski resort alliance spans 12 resorts and 1200 kilometers of slopes (many of them rather demanding, especially in Trentino), making it the world’s biggest ski resort alliance. Veneto is Italy’s most popular region amongst tourists, with Cortina d’Ampezzo as its number one ski resort. The Dolomites reach all the way to north-eastern Italy, to the Friuli-Venezia Giulia region neighboring Slovenia. The region features charming, internationally less well-known resorts such as Piancavollo or picturesque Valcellina, ideal for skiers who prefer originality rather than glamour.

Piedmont is Italy’s second-largest region and is not overrun by tourists despite its 2000 kilometers of slopes for all levels.

Want to go heliskiing or backcountry skiing? The Aosta Valley is the place for you. There, where the peaks reach higher than 4000 meters, you will find eight heliskiing bases and hundreds of guides.

Italy can be a bit more moderate in terms of pricing than the other major European winter sports destinations. Be sure to check out the  Dolomiti Superski if you plan to ski multiple resorts.

The newest “in place” (just ask the Brits) is Slovenia. It’s budget-friendly, offers plenty of skiing and you’ll feel like you just entered a fairy tale. Slovenia is at the intersection of the Alps, Mediterranean, Pannonian Plain, and the Dynamic Alps. It is likely the best-value skiing you’ll find anywhere. The largest ski area is Mariborsko Pohorje where there are plenty of trails including one of the longest flood-lit slopes in Europe for night skiing. There are slopes for all ability levels here. Krvavec is close to the capital of Slovenia and offers a more challenging fare. Ski Centre Vogel in Triglav National Park offers astounding views and will keep any adrenalin junkie happy. Kranjska Gora is Slovenia’s oldest ski resort, which opened in 1948. The resort is divided into five different sections around the municipality.  It has a total of 12 miles of ski slopes and a Snow Fun park for snowboarders. The resort frequently hosts World Cup ski races. And, just in case you want to try still another option there’s Andorra in the Pyrenees. Grandvalira is the largest ski area in the Pyrenees. There are 130 miles of ski terrain for all levels and sports a casual, fun atmosphere. Vallnord is smaller but ideal for families with a nice variety of slopes.

Here’s some advice from SnowPak travel agency for those traveling from the USA to the Alps: Depending upon where in Switzerland, Austria, France, Italy or Germany, you plan to ski, your gateway cities will likely be Geneva, Zurich, Munich, or Milan. Today, public transportation (trains and buses) are so efficient that you do not need to rent a car.

Many ski villages are car-free as well, so once you arrive, everyone uses ski lifts and buses exclusively. Additionally, car rentals in Europe are considerably more expensive than in the U.S., and driving directions and signage can sometimes be challenging. Tip: if you do decide to rent a car for your ski trip, be sure to bring or rent a GPS and download appropriate European maps in advance as they will prove invaluable. Finally, there’s really no need to bring your ski equipment with you (possible exception: boots) state-of-the-art rental shops abound in every ski village, generally at good prices. Want your ski runs long and fun? Head for the Alps