The best skiing in the Southern Hemisphere

As our winter season draws to an end and we sit peeling off layers of thermals, trawling through our ski albums on Facebook and yearning for gluwein, powder hounds on the other side of the world are gearing up for their winter. So snap out of it, sit up, and read OnTheSnow’s guide to the best of the Southern Hemisphere. And – funds permitting of course – book that overdue trip.

Here’s our pick of the best ski resorts in the Southern Hemisphere for freeriders, families, après-ski and snow-sure slopes.

Good things come to those who wait. This may well be the mantra you find yourself repeating having made the pilgrimage to Las Lenas only to find that storms have closed down the upper part of the mountain. Our advice? Plan a longer trip if you can manage it because Las Lenas, quite simply, has some of the most accessible big mountain terrain in the world. The Martes Chairlift is the star attraction transporting expert skiers and shredheads to the highest point on the mountain. From there you have access to a huge range of backcountry terrain, gullies, ridges, bowls, and deep waist powder. There is also a very decent range of mellower skiing for the less crazy.

Portillo’s reputation among pro skiers and riders consider Portillo second to none. Many North American pros choose to make it their base for the summer such is the variety of challenging terrain. The powder is light and dry too, thanks to the high elevation – 10, 860 ft. at the highest point – and the slopes are generally uncrowded.

Steep fall lines are accessible from the Lake Chutes, take the right from the Condor lift, these are sustained for over 300 metres of vertical.

If you’re good enough, take on the 1,500-metre Super C Couloir – one of the most talked about pro lines in the Andes. If you’re after a taste of the backcountry you can head out from the Primavera Run. Heli-skiing is another popular Portillo activity and an excellent way to access more pow.

Cragieburn Valley is not for the fainthearted or beginners for that matter. All of the terrain here is for experienced skiers split almost halfway between intermediate skiers (55 percent) and experts (45 percent). The resort is a classic club field meaning that it is not for profit, rather it is run by dedicated club members.

Craggie is an awesome place to ski and remains largely undiscovered which means more freshies for you and us. It’s only a matter of time.

The Remarkables nabs the top spot when it comes to family skiing in Oceania. Why? It’s not overly commercialized, has a relaxed homey vibe, is less crowded and gets better snow cover than its neighbours.

There’s also a wide range of activities (snow tubing park) and learning programs to suit all abilities such as a network of progressive terrain parks with wide, gentle slopes for newbies and big mountain steeps for the more experienced in the group. Events are plentiful too, from mini park battles and eating contests to gigs on the slopes. Best of all it’s where the Lord of the Rings was filmed. Second best of all: children 10 years and under get to ski for free.

Perisher, in New South Wales, is the largest resort in the Southern Hemisphere. Four areas – Perisher Valley, Smiggin Holes, Blue Cow and Guthega – provide a variety of terrain for all skiing levels. What really makes the resort stand out is the abundance of entertaining activities for the whole family, from night-time skiing, to a free fireworks display every Thursday. The mini half-pipe at the Yabby Flat Terrain Park which will allow beginners to safely learn the basics of half-pipe riding before moving onto the Front Valley pipe.

The Snowy Daycare also caters for kids as mini as 6 weeks old.

Queenstown is a popular base for the four main ski fields: Coronet Peak, The Remarkables, Treble Cone and Cardona Alpine Resort. As Australasia’s premier winter sports and entertainment destination, Queenstown, isn’t about to start resting on its laurels. Come June there is one riotous celebration that everyone’s invited to: the American Express Winter Festival. This 10-day party is filled with 60 events and a majestic fireworks display to kick things off = best week and a half ever.

Picturesque Cerro Catedral, known locally as Bariloche, is renowned across South America for its hedonistic nightlife. There are plenty of bars and mega-clubs such as Rocket and Pacha. Our tip? Head to local haunt La Cantina first where drinks are cheap and the vibe is playful. As for food, go to Alberto’s which has been serving the best steak in town for more than 30 years.

Skiing and riding is top notch too as the 1,200-hectare ski area offers a wide range of diverse terrain from steep, rocky faces to pillow lines through the trees.

Less than 40 miles away from the bustling city of Santiago lies Valle Nevado which, with great links to neighboring resorts El Colorado and La Parva, is part of the largest skiable domain in the Southern Hemisphere.

Purpose built and developed by the French in the 1980s, the resort bears some resemblance to Les Arcs, albeit, a bit more modern, a bit smarter and that much more attractive. Its main appeal however is its terrain made up of steeps, vertical and a series of wide-open bowls. These bowls are protected from the elements by rows of southern-facing slopes, creating a micro climate around the resort that ensures superior powder.

British pro skier, Chemmy Alcott says, “For those of us in the Northern Hemisphere, it’s a big effort to get there, but if you’re a ski fan searching for blissful snow and your own private mountain, nothing beats it!” (Financial Times).

The world’s southernmost resort, Cerro Castor, is also South America’s most snow-sure. Modern, medium-sized, and with sublime views of the ocean, the resort typically receives 1.50 meters of fresh powder throughout the season. And if Mother Nature isn’t feeling so generous, state of the art snow machines create a smooth surface on which to carve.

Throw in friendly staff and lifts that are more frequently open than closed, and you can see why Cerro is the preferred ski destination of many South Americans. 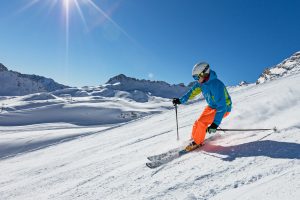 The best resorts for skiing in April — extend your season 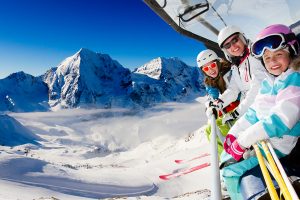