Espace Killy, the third biggest ski area in France, links the two famous ski resorts of Tignes and Val d’Isère. Who’s Killy? You have to ask? Jean Claude Killy, of course, the Olympic superstar. The entire region is a special favorite among British skiers and riders.

The conventional wisdom is that Val d’Isère is for the après-ski and Tignes is for extreme sporty types; that Val d’Isère has retained its authentic mountain domestic architecture and that Tignes is Las Vegas in the snow. As in all good caricatures, there is an element of truth. It is true that the après-ski is outstanding in Val d’Isère and that Tignes boasts of being the sportiest winter sports resort of them all. It is after all in Val d’Isère that one plays polo and in Tignes that you can climb a frozen waterfall or dive under the frozen lake.

In the beginning, the two villages were pretty much the same: two ancient mountain settlements in Isère that began to attract winter sports fans before World War II. But in 1952, Tignes’ old village disappeared beneath the waters held back by Europe’s highest dam. Val d’Isère however remained untouched in its valley. The villagers from Tignes moved 6km further and higher up the valley to rebuild their lives and livelihoods at Val Claret 1860m. They did so at a time when the ideas of Le Corbusier and his modernistic tower blocks dominated French architectural thinking – ideas that the developers and promoters of the new ski resort adopted with enthusiasm. Since then the neo-traditionalists have made a comeback and the latest developments have given in to the undoubted bias of winter sports enthusiasts for chalet-style buildings and old wood. On the whole, Val d’isere is considered more aesthetically pleasing, apart from its new development – La Daille – where modernity rules.

Val d’Isère is in a valley that lends itself to a great variety of pistes. You will want to ski the Bellevarde which boasts the OK piste – the site of the annual World Cup men’s downhill, as well as the Face – the Olympic piste in 1992 and scene of the World Championships in 2009. You can get there easily from La Daille by the underground funicular and from the centre of the resort via express cable lift.

Tignes on the other hand has unusual black runs known as Naturides. Normally the snow grooming teams smooth the green, blue and red runs every night. However they leave the black runs to retain their natural characteristics – powder after a heavy snowfall gradually turns into moguls over time. Thus the experienced skier has the chance to try ski runs that are relatively under-used although secure and patrolled as usual. it is an ideal rehearsal for off-piste skiing: the Naturides runs on Tovière are: Paquerettes, Envers de Campanules, Grizzly and Aster; the Naturides runs on Le Palet are: Guerlain, Chicherit and Golf; and on the Aiguille Percée – Aiguille Percée, Oeillet and Epilobes.

The two resorts being interlinked means you can ski from the more difficult Val d’Isère to the easier Tignes and back. To cross from Val d’Isère to Tignes you have the choice of Fresse, Tufs, Aéroski and the téléski Combe Folle reserved for adults. To travel from Tignes to Val d’Isère you have the choice of Borsat or Tommeuses. If you succeed in missing the last ski lift you can still use the shuttle bus between the two resorts. There is also the Ski Guide facility available on iPhone to help you – gone are the days of clutching a damp map of the resort or it being blown away on the wind as you try and find your way.

The Espace Killy ski area is set largely above the tree line, so neither resort has many narrow, tree-lined runs.

The bulk of the runs at Tignes are not too difficult with the exception of la Sache that runs down to Brévières below the dam (descent of 1198m) and Paquerettes on Tovières. Most runs here are long and wide – ideal for beginners and intermediates – and also give the impression of being less crowded. A favourite is the blue Prariond run, which goes right from the top of the Fresse to the bottom of the mountain.

The steep valley of Val d’Isère means that certain runs are difficult especially at the bottom. Intermediates that lack confidence may prefer to use the lifts to come down from Bellevarde or Solaise. The easiest way to ski down is to la Daille. At Tignes on the other hand, the lower slopes are less steep with the disadvantage that the snow tends to turn soft in the sun.

It is noteworthy that at Val d’Isère 19 percent of the slopes are green for beginners, whilst there is only one green run at Tignes. On the other hand Tignes makes up for it with far more blue intermediate runs – 55 percent – whereas there is only 35 percent at Val d ‘Isère. A criticism of Val d’Isère is that the classification of the runs tends to be unrealistic and many of the green runs could easily be blue or even red. If you are an experienced skier of course none of this matters. If you are not, it can be bad for confidence.

The nature of the valley around Tignes means it is possible to ski the runs clockwise. From Val Claret start with Palet and come back by Tovière. From Tignes you go via Palafour and come back via Tovière. Doing it this way you are always in the sun.

You can hire a BSF instructor, and it is easier to learn to ski in Tignes. Still, there is a nursery area at Val d’Isere.

When considering the two resorts, it is hard to ignore Tignes’ biggest asset – the glacier La Grande Motte. There is no equivalent in Val d’Isère. The glacier used to be open for skiers all year round but is now closed for a few weeks at the end of the season and in the autumn partly to avoid over use and partly to allow the necessary time for the maintenance of the high mountain ski lifts. To reach the Grande Motte from Val d’Isère you have to cross the whole of the resort of Tignes. So if it is the glacier that really interests you then choose a ski holiday in Tignes.

For skiers and non-skiers alike, if you want the best view of the glacier, take the lift from Val Claret to la Grande Motte. It travels from 2100m to 3032m in a record 6-8 minutes. In the spring if you are lucky you will see a marmot, just out of hibernation, standing on his earth and whistling a warning of your presence.

As far as après-ski is concerned there is little doubt that Val d’Isère comes out on top with its more fashionable clientele and more ‘switched on’ nightlife. Not that the après-ski in Tignes is mediocre, but it is further from the pistes and is less at the heart of what the resort is about. It is no coincidence that the more fashionable Val d’Isère tends to be more expensive than sporty Tignes.

Both resorts are pretty evenly matched: Val d’Isere comes out on top for experienced skiers and apres-ski while Val d’Isere offers more for learners and year-round skiing. So now all you have to decide is what is most important to you? 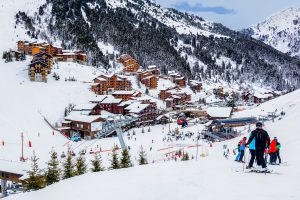 10 of the biggest ski areas in Europe to challenge you