Five of the best resorts for non-skiers

Ski resorts now understand that not everyone wants to thrash up and down the slopes all day; some mountain lovers can’t do it anymore and some heretics never wanted to. Market studies are telling resort planners that the non-skiers are the ones with the money, and they’re the ones that decide where the family goes on holiday. So it is time to look after them.

Here are five of the best resorts for non-skiers:

Ski area: Avoriaz is part of the Portes du Soleil linking eight French resorts and four Swiss with 650km of pistes. There is a vast range of skiing is suitable for all levels, from the unnerving black Swiss Wall to the many long blue runs.

Non-skiers: Avoriaz is ideal for families who want to split their time between the slopes and non-skiing activities. As the only truly car-free resort in France, Avoriaz got a head start on its non-skier appeal by offering a relaxed, safe village for those spending lots of time off the slopes. The centre has cafés, restaurants and a range of shops – all accessed on foot or by horse-drawn sleigh.

Virginie Dupé, head of communications at the tourist office spoke to OnTheSnow about the growing concern for non-skiers: “We have done market studies underlining the importance of non-skiers to us and other resorts – they’re often grandparents – so we have accommodation where different generations can be together, yet have their own space.” Pierre et Vacances has recently built a series of communicating flats with a two-room linked with a larger three-room flat, sleeping together up to 12.

So what makes Avoriaz one of our best resorts for non-skiers? Well here are a few highlights . . . The new sub-tropical Aquariaz water park is a big success for all ages. It boasts a waterfall and a series of pools, water jets, slides, with currents at different speeds for you to drift along and a special sidewinder feature for the more intrepid – a sort of water half-pipe with a 10m drop. There are water gym sessions three days a week and an open-air hot tub.

There’s also the Village des Enfants in the centre where small children can play and parents/grandparents can easily keep an eye on them. The Village takes children from 3 to 16 and for the very young children the ski lessons are gently introduced along with play sessions with wigwams and toboggans.

Avoriaz also plays host to two of the biggest mountain music festivals in the world: Rock the Pistes and Snowboxx. See our “Best Music Festivals Above the Clouds”

Ski area: Traditional Ellmau is in the SkiWelt Wilder Kaiser-Brixental (279km) – the biggest connected ski area in Austria and one of the world’s best as well. Those learning to ski will find huge areas of gentle nursery slopes at valley level and the prices refreshingly modest. Children 15 and under ride free all season if a parent buys a Ski Welt ski pass valid at least three days.

Non-skiers: A leisurely way to visit the area is to take the Hartkaiserbahn mountain railway and have lunch at one of the SkiWelt’s charming ski huts or snow bars. Horse-drawn sleighs are another popular way of taking in the spectacular scenery. For an afternoon out, take the 30-minute drive to Kitzbühel – a sophisticated, medieval town with elegant, pedestrian streets lined with smart boutiques and luxury hotels. In the evening, take the 11km floodlit tobogganing run – with great views over the sea of lights in the valley – and end up in the village centre where there is a great atmosphere in the cosy bars all winter long.

Ski area: Two-time host of the Winter Olympics, St Moritz has 350km of pistes for all levels, divided into three areas, all immaculately groomed from 1850m to 3300m. The views of the Engadin lakes and peaks are spectacular and the freeriding is awesome.

Non-skiers: St. Moritz is well deserving of its place on our “best resorts for non-skiers” list. The possibilities for non-skiere here are endles: take a stroll through the highest shopping street in Europe ‘Via Serlas’ where you will find all the top brands and boutiques; enjoy spectator sports like the Cartier Polo World Cup and cricket on ice; take tea in one of the top hotels (whether you are a resident or not); tour the national park with a warden; or take a train ride on the UNESCO listed red train.

Further rail trips include evening excursions up to the Alp Grüm where fondue is served. For the return journey, the lights are turned out and classical music is turned up as you gaze out at the moonlit scenery. Alternatively, take the railway to the top of the Muottas Muragi where skiing is not allowed (2,456m) and watch the sunset.

St Moritz is also foodie heaven: a total of 266 Gault Millau points, five restaurants with Michelin stars and is home to the annual Gourmet Festival with famous visiting chefs.

For the more energetic, apart from all the usual off-piste activities like snowshoeing and cross-country skiing, you can take a stomach-churning ride on the Olympia bob run – with a professional pilot and brakeman for safety – 80mph, 4.5 gravity and 75 seconds of pure adrenalin.

For everyone, there is a fantastic sunshine record of over 300 days a year.

Ski area: Bansko is a first-class ski area that has grown up above a traditional Bulgarian town. It has 65km of ski runs best suited to beginners and intermediates. Real skiers can take heart from the recent visit to the World Cup Alpine ski races.

Non-skiers: There are two great day trips for non-skiers: to the stunning UNESCO-listed 11th-century monastery of Rila (1hr25) and to the wild mountain village of Kovachevitsa with the nearby hot springs (1h10). If you don’t want to go too far, the market in Bansko is fun. The resort also has all the usual alternatives to downhill skiing: ice skating, tobogganing, cross-country skiing, snowshoeing, spa, saunas and the obligatory Irish pub.

You may also be pleasantly surprised by the standard of amenities. Marion Telsnig of Crystal Holidays told OnTheSnow, “Bulgaria suffers from a post-Soviet tag. There is now some great accommodation with swimming pools and spas. Forget stereotypes of ex-Soviet utilitarian concrete bunkers, we take people to the Kempinski Grand which is a first-class hotel by any standards.”

Ski area: Not only has Cervinia got the Italian family-friendly touch but it is a whole lot cheaper than Zermatt, just over the Swiss border, where coffee is roughly three times more expensive. Transfrontier ski passes cost less, as does ski rental. Cervinia is ideal for beginners and intermediates.

Non-skiers: From a family point of view the resort is well geared for children and their minders. There are kids’ snowparks and playgrounds, all with plenty of chill-out space ideal for grandparents keeping an eye on young children. There’s also a natural ice rink with an accompanying bar and sun terrace.

Cervinia is also on our ‘best resorts for non-skiers’ list due to its amazing nearby excursions, such as to the highest ice caves in Europe (at 4,000m); lunch at the traditional Riguio Guide del Cervinio on the Plateau Rosa glacier; and a visit to the ancient village of Chamois, which can only be accessed by cable car in Buisson just beyond Valtournenche. The Centre Sportif de Valtournenche also offers tennis and swimming. 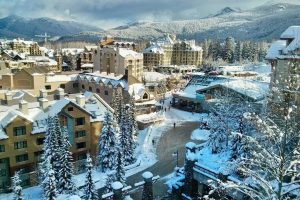 UK skiers and riders pick their favourite resorts for holidays 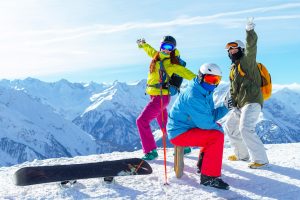 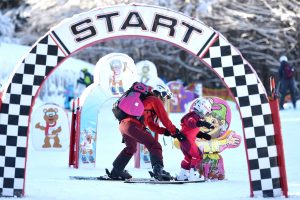 Five of the best ski resorts for beginners 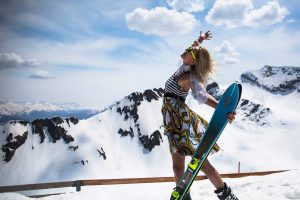